how the hell do people write personal essays? 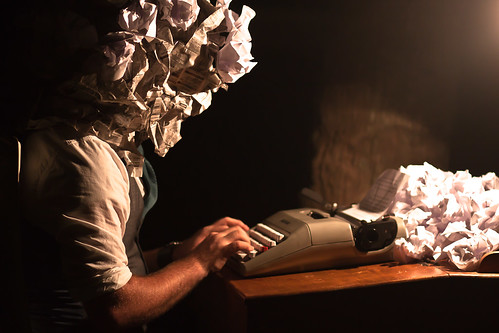 “Writer’s Block I” By Drew Coffman.

No, seriously, where do they get the material?

I’ve been working on a new short story lately, tentatively called “The Summer House,” and one of my favorite modes of procrastination is scrolling through the endless recommended essays on Medium. I made an account, but seriously, don’t bother looking for me. I posted exactly one thing, which is Death Girl, which I can’t even get anyone to read on THIS site let alone on one full of better writers.

Despite my single, lonely contribution (sitting pretty at zero hits ever), Medium is admittedly more of an essay and interest-based journalism outlet than a fiction one. I don’t know who owns it, but it looks like the bastard love child of twitter and tumblr, minus a good deal of the stupid. I can spend hours there reading jargon-free science essays curated for the interested civilian and advice and essays about travel and personal discovery. Which, you know, isn’t great for my productivity or anything, but it has at least benefited me aspirationally.

One of my favorite pieces is by Stephanie Rice, describing her experiences with a friendly new Craigslist roommate who left one day, presumably to visit an ex, and then died, leaving the writer/roommate to find out two days later on facebook. She says something interesting about her motivations in living there in the first place:

My rapidly approaching 30th birthday had prompted a determination to sculpt my existence into everything I wished my 20s had been. That meant reconnecting and disconnecting, thinking about the space between who I was and who I wanted to be.

Don’t I ever identify with that. At 28, between jobs, scrounging for employment and income and to finally–finally–move out of my parents’ house, my life so far is a series of failures. Writing blogs like to talk about this, how selling your words means wallpapering with rejection, and in a way my 20s has been similar. Dropping out of school only to pick up a dead-end retail job, going back to school, leaving again because of money, finally returning to a new one to pursue a new degree and career I ended up hating in practice and now scrambling to find a way to get back on track, to locate and achieve the only thing I ever wanted in the first place and had lost sight of. Between burying myself in academia, chronic lack of funds, living at my parents’ home far outside the relatively small radii of my few local friends’ willing commutes, my life is boring.

But is that a serious obstacle to writing? Sure, I can write fiction, or try anyway, but I look at people like Stephanie Rice and I wonder if, beyond actual word-smithing, if being a good writer means things actually happen to you. Because for someone like me, that is difficult. How do you make things happen? Do people just decide one day to start going out to bars alone despite having no willing company? Do they depend on handouts and maxed out credit cards for these epic vacations and moves across country that I always seem to read about? Or do they have similar lives to me, insular, dull, and are they just better at identifying and talking about the small things that do happen?

What I’m trying to say here is that I really want to be one of these essay writers. I want to write fiction, too, but I want to be the kind of writer who has and shares meaningful and interesting life experience. I want to have it, and I also want to write about it. And nobody ever tells you how they do this, how they identify good topics, whether you have to lead an interesting life first or if everyone leads one already and the trick is looking at the right details. And if they do tell you, it’s in a $400 online class, which, no. But until I figure out whether it’s my life getting in my way or simply my vision, it probably ain’t gonna happen.

Anyway, on an unrelated housekeeping note, I have a few more reviews coming up, when I can finish actually reading the material: one short fiction collection and one graphic novel/webcomic volume. If you  have anything you’d like me to look at, send me a holler, either in the comments or by email.

← Book Review: Dark but for the Stars by Nathan Crowder
Book Review: The Fault In Our Stars, by John Green →